This is one of the rare works in which Ezzam’s skin approaches me as it is, undisguised as a beguiling flower encased within a shape of glass. Instead, it presents itself at once as organ and envelope, a still-breathing membrane; a whole sole laid bare.

The performative video presented here pays homage to the late Brazilian artist Letícia Parente (1930-1991) in its revisit of one of her most seminal works, Marca registrada (Trademark, 1975). Borrowing from its form, the camera focuses on Ezzam’s hands as he threads a needle, guides it into his foot, and embroiders onto the top layer of his sole. The similarities to Parente’s iconic piece however end here for now. Ezzam performs this act of sewing steadily, puncturing his skin time and again until a word creeps into view: “MINORITY” – spelt out in capital with crude letters of black thread. He snips off the excess with a dressmaker’s scissors and angles his foot in display of the finished word before the picture fades out. 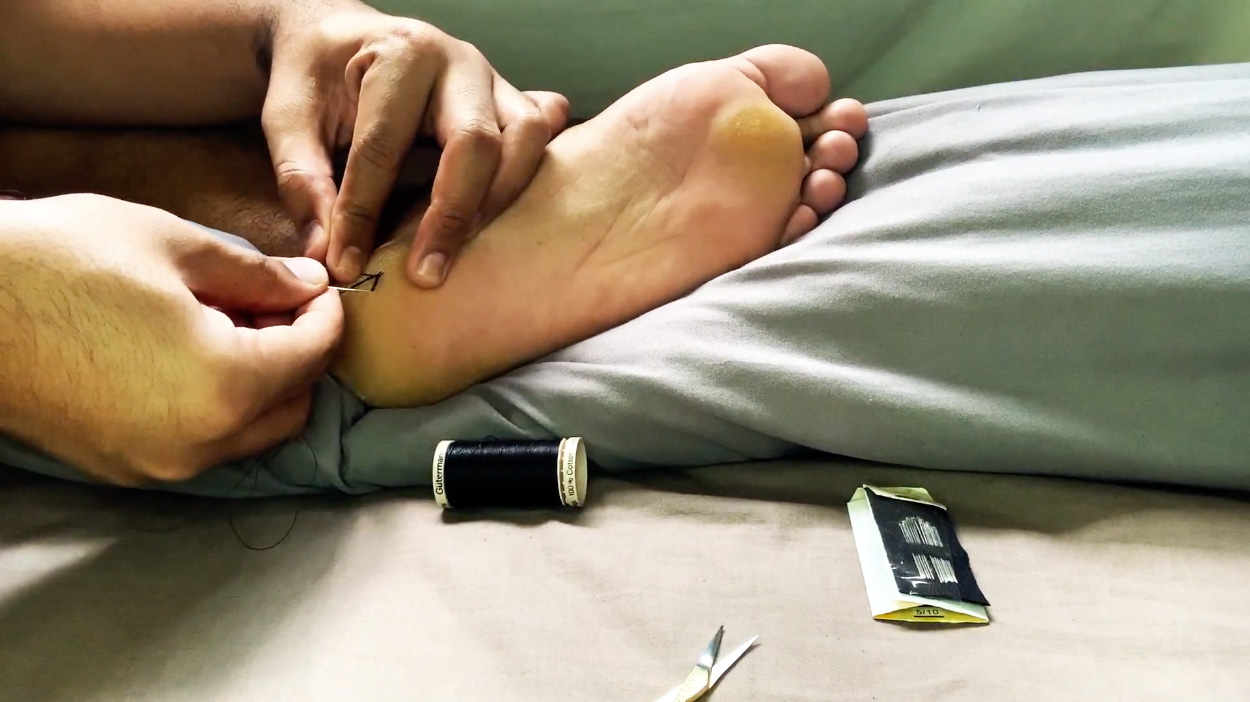 Audiences acquainted with Ezzam’s practice would by now be sensitive to his longstanding interest in the body, which he uses as both medium and metaphor to explore themes of identity, abjection and invisibility as a queer Malay-Muslim in Singapore. In his performance art practice for instance, allusions to this ‘otherness’ can be glimpsed in his unsettling smearing of body paint all over his arms, face and inner walls of his mouth (black paint for when he dons black, white for when he wears white) till the invading pigment obliterates every hint of his original complexion, erasing him from both inside and out. In his installations, the politics of visibility and abjection are likewise evoked through the objects he sculpts from skin peeled from the very soles of his feet. Often enough, these take the form of flowers that seek to captivate from afar, but the spell turns abruptly on viewers as soon as they draw close enough to recognise the furrowed lines of human skin. Too often they recoil at this realisation, troubled by the mismatch between perception and expectation.

Appearance, after all, isn’t everything – and Ezzam’s works offer more than just a visceral response. While the words “Malay” and melayu are most often used interchangeably in reference to ethnicity, melayu also translates in a second and lesser-known way: “to wither” or “to slowly decay”. In incorporating his brown body into his works, Ezzam exploits skin as ephemera, as site of meaning at which cultural identity is both formed and assigned – thus opening up the perceived “worth” of minority communities for deeper contemplation. Such symbolisms may be subtle and unuttered, but are deeply embedded and ever present in his works.

It is from this perspective, I suppose, that this latest performance for video looms with an unusual force. you’re just going to stand there and watch me burn? builds on the same longstanding themes in his practice while being produced during a particularly strange and tumultuous time in our recent history: in the midst of the ongoing Covid-19 pandemic with enforced distancing and new realities; as the Black Lives Matter movement peaked in the US and rippled across the world into Singapore as well, stoking the flames of our own systemic and deeply-rooted racial tensions; as gender and sexual minorities continue to face varying degrees of discrimination worldwide. Reflecting on this cultural moment, Ezzam has made an unprecedented leap — where difference and marginality are typically alluded to in his works, here marginality is boldly proclaimed, reclaimed, and brought to the very centre of the piece.

While scepticism generally remains about art’s essentialness or ability to affect any real social or political change, its diverse voices can, at the very least, demonstrate how every culture, subculture and individual is as valid and vulnerable as any other. At the heart of this video is the artist’s meditation on what it has meant to inhabit multiple minority identities. Recognition of difference is presented here as a source of pain or discomfort, with the act of sewing – long regarded as a “feminized practice” – adding yet another interpretive layer to the performance. Like Parente, Ezzam implicates the viewer in his act by compelling us to observe the action from up close. In our interest to discover the word he is forming, we cannot look away, amplifying our discomfort to see the wholeness of the body violated and the unassailability of the skin willingly breached. And in our silence, we become complicit in this act of (self-)harm; we grow into awareness of our responsibility (especially for those of us majority camp-dwellers) in the broader social contract.

Despite these times of distance, the body as a site of common physiological experience remains a powerful tool for inspiring empathy. Ezzam’s work is a message of solidarity to other marginalised voices, seeking to empower them to forge new paths for themselves, on which they will continue to traverse – tall and proud – on the soles of their own two feet.